And Jesus said to him, ‘Foxes have holes, and birds of the air have nests; but the Son of Man has nowhere to lay his head.’ (Matthew 8:20)

People often assert that Jesus was homeless. Sometimes they describe him as a peasant. They usually make this argument to demonstrate his solidarity with the poor.

I have two problems with the argument. First, it is not accurate. Jesus likely did have a home, and it may have been at the traditional site of Peter’s apartment building. 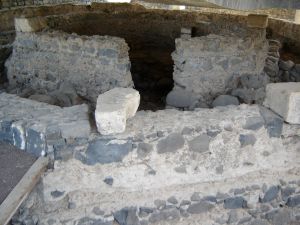 He left Nazareth and made his home in Capernaum by the lake, in the territory of Zebulun and Naphtali… (Matthew 4:13)

When he returned to Capernaum after some days, it was reported that he was at home. So many gathered around that there was no longer room for them, not even in front of the door; and he was speaking the word to them. (Mark 2:1-2)

These simple details can be jarring for those of us who have grown up on movies of Jesus outdoors in pastoral settings, preaching to the multitudes. Jesus the builder (tekton, not “carpenter”) lived in a city. He likely had a job in Capernaum, possibly using the stone-cutting skills he learned in Nazareth to make the millstones that were one of Capernaum’s main industries.

When he began his itinerant ministry, people were more than happy to host this celebrity in their home. His reputation was good enough that everywhere he went people were delighted to house and feed him and his disciples. He stayed with Simon the Leper, Levi, a nameless Pharisee, another Pharisee who was a leader, and even Zaccheus. He had a group of women disciples who supported him.

In contrast, modern people who are homeless are often also cut off from relationships that could benefit them financially. Bryant Myers points out that there are many types of poverty: financial, spiritual, relational, political, and so on. People who are poor in one area are often poor in others, and you cannot adequately address one without the others. The teenager kicked out of his home because he is gay becomes homeless because he is in political and relational poverty. In the same way, people can often survive a temporary setback in one area (financially) because they have other areas in which they are not poor (relationally). As a middle-class person with middle-class friends, I have people who will loan me their cars if mine breaks down—because they have spare cars! This is the kind of privilege that many people take for granted: transportation, free use of public spaces, access to bathrooms, a community of support, clout and social capital.

My second problem with the argument that “Jesus was homeless” is that it romanticizes homelessness and poverty. Those of us who have money find it easier to believe that you can live without it, and we imagine Jesus and the disciples cultivating a Zen-like detachment from such things. We imagine their crew telling stories around a campfire. Middle-class people think homelessness is something like camping out, the ultimate simple-living lifestyle option. After all, didn’t Jesus advocate giving up all of our possessions?

Perhaps I am simply a person of weak faith, but I find it pretty hard to believe that one can create a world-changing ministry and movement while struggling with homelessness.  Jesus would have no time to preach, because he’d be standing in line at the employment office. He’d have no energy to preach because he wouldn’t get any sleep. He’d be commuting four hours a day on a bus because there was no direct route from the abandoned house he lived in to the basalt quarry where he worked. And no one would follow him or take him seriously because he’d be practically invisible. So, no, Jesus wasn’t homeless.

What did he mean, then, when he said he had nowhere to lay his head?

In the Hebrew Bible, referring to “laying one’s head down” usually means being able to do so in peace, as in Psalm 23, Psalm 4:8, and the different animals lying down together in Isaiah 11:6-7 and Hosea 2:18. Sleeping an untroubled sleep is a gift from God.

And you will have confidence, because there is hope;
you will be protected* and take your rest in safety.
You will lie down, and no one will make you afraid;
many will entreat your favor. (Job 11:18-19)

Foxes and birds to not live in their respective shelters—it’s where they go to be safe. The would-be disciple is warned that following Jesus means perpetual danger, sleeping with one eye open, always on the run. This warning is spoken by a marked man who has a price on his head, perhaps in part because he does speak out for the poor and those without homes.

Of course, this last point is something Jesus does have in common with people who are homeless. A place to sleep is not just about getting rest: it is about safety. If you must live in constant fear for your bodily safety and the safety of the few possessions you do have, you are in a state of constant, health-destroying stress.

When I hear the scripture that way, I can’t help but remember that most of those first disciples were killed. Thinking of the scripture this way shifts the meaning away from personal piety and self-denial (which are still important) toward the kind of activism that puts Jesus’s followers at risk.