So, yeah, the headline to this post is deliberately provocative, but I think it’s important for church leaders to recognize how changing marriage and birth rates affect the churches they lead. (There are, of course, Christians who do support this philosophy).

This is a follow-up to my last post on this subject, Why Are Fewer People in Church? It’s the Economy, Stupid. I said that the economy has affected how people create and maintain families, and that because churches have strategically focused on stable families, declines in participation are probably more related to the economy rather than to theology or mission (which preachers prefer to talk about). I drew evidence for my argument from Robert Wuthnow’s book After the Baby Boomers, which far too few church leaders have read. I want to share a one particular excerpt from it on why changing marriage patterns and birthrates have affected church participation. 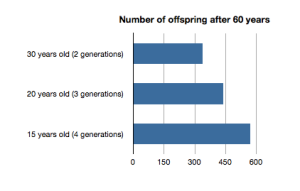 I’ve added another hypothetical average age of childbirth (15 years) not because I think it’s a good idea, but to illustrate the math. – D.

In addition, waiting until age 30 means more discontinuity of the kind that often weakens religious ties with religious traditions (geographic mobility, travel, higher education). To the extent that religious organizations perpetuate themselves by encouraging families to have children, then, the most significant influence may not be the number of children, but when they have children. (Wuthnow, 143)

Again, I want to assert that I do not think that the Great Commission (making disciples of all peoples) is primarily about breeding new Christians, nor do I think churches should actually be advocating for earlier heterosexual marriages or contraception bans. But I do think that part of the religious right’s idolatry of the family comes from a recognition and prioritization of these social realities. Churches that have built Jesus-theme-parks for families know which side of their bread is buttered.

As a culture,  we have idolized a particular vision of family even as we have made that vision less attainable. We have made it economically tough for young people to marry and have babies, even as the religious right has ratcheted up their condemnation of sex outside of heterosexual marriage. If we make it hard for people to form and maintain families, we also shouldn’t be surprised when churches that depend on families begin to decline. Again, I don’t think this is the way things should be. I just think it’s a pretty accurate description of the way things are.

I’ll restate some of the important questions that I believe churches should ask: How can we be church to people who choose not to or can’t have children? To single parents? To gay and lesbian parents? To grandparents? How can we help people whose life goals do not include “settling down,” but building a life of active ministry?