I’m doing some research for our October sermon series at Saint Junia UMC. I’m calling it “Just Sex: Justice, Sexuality, and Christian Ethics.” I’m also continuing my theme of drawing attention to Robert Wuthnow’s book After the Baby Boomers, which I referenced the other day in my post Why Are Fewer People in Church? It’s the Economy, Stupid.

These two graphs compare data from the General Social Surveys. This first graph illustrates the change in people’s view of premarital sex from 1977 to 2002. 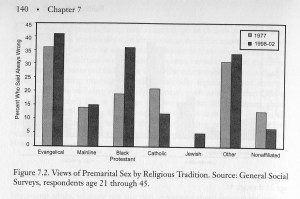 So, self-described evangelicals have become more conservative about sexual ethics (in this area) since the 70’s. The second graph illustrates their behavior.

However, behavior does not always follow convictions. Fully 69 percent of unmarried evangelicals age 21 through 45 said they had had sex with at least one partner during the previous 12 months. To be sure this… was lower than the comparable figures for adherents of other religious traditions… But it was not that much lower. (Ibid).

This discrepancy between opinion and action means a whole lot of people walking around with a whole lot of guilt— guilt that they then project onto the whole realm of human sexual behavior. Especially other people’s sexual behavior. Those most likely to receive the brunt of projected conservative self-loathing are those with the least power to defend themselves: women (especially teenage girls) and gays and lesbians.

I should point out that the graphs can be a bit misleading. The first graph is maxed out at 45%, not 100%. So, if you think of 100 self-described single evangelicals, perhaps 69 of them have had sex outside of marriage, only 10 of whom claim it’s always wrong. The other 31 are completely consistent in their words and actions… Except that when we’re talking about groups, we know what’s being preached from the pulpit.

Taken as a whole, though, the American view of premarital sex has not shifted appreciably since 1977. Nearly just as many believe that it is always wrong. What has shifted is the polarization among the groups.

Again, I think it’s important to point out that one of the contributing factors to sex outside of marriage is that the average age of marriage is later, and the average age of marriage is later because it is less economically viable. So if you have conservative opinions about both economic policy and about sexual ethics, your preferred policies are working against each other. If you want to promote traditional marriage and conservative sexual ethics, you need to help lift people out of poverty, promote job stability, and reduce economic anxiety.

In the book Diary of an Early American Boy, Noah Blake, in 1805, planned to propose marriage to his sweetheart when he was 15 years old. This was before there was such a concept as “adolescence” — a male was either a boy or a man. Teenagers were adults, and expected to act like adults. Life was very stable; people might never leave their county for decades. The industrial revolution, child labor laws, and public education created a new class of people who were neither children nor adults. We isolated them from a community adult influence by putting them in grade-level education factories. Knowing full well that society has no need of them to fulfill adult-like responsibilities, they are locked into preparation mode for decades. I’m not promoting a return to “the good old days” of subsistence farming and smallpox, but we keep putting marriage and the ability to “settle down” further and further out of people’s reach.

We like to think of sexuality as something personal and private, but the fact is our sexual behavior is also shaped by politics and economics in ways that we, as a society, take for granted. People who follow Jesus can’t pretend we still live in 1805, or 2000 years ago. We need to ask what kinds of ethics will best reflect God’s kingdom in the world we live in now. I’m actually fairly conservative about this stuff: I think self-control and self-denial are important aspects of emotional intelligence and maturity, and that sexual irresponsibility hurts people physically and spiritually. But I suspect that those two graphs above represent a sin and sickness in our world that goes beyond garden-variety hypocrisy. I think it represents a fundamental problem with the way we think about religion, God, and being human.

Here’s three insights from around the web that I think are great for thinking about fundraising, church budgets, and other money-related stuff.

The first is Amanda Palmer’s TED talk on “The Art of Asking.” What I think is fascinating in her talk is that she puts her finger on what pastors have been saying in churches for ages: we have a need to give, that giving and receiving can be profoundly human and spiritual acts, and that asking should not be shameful. In fact, it is liberating to give.

I think the big disconnect is that people think of giving to individuals differently than they think of giving to organizations. It feels good to give to a person. It feels impersonal to give to an organization. But the reality is that those lines are blurry. Amanda Palmer is an institution, and churches are people who coordinate around a common mission. If church members feel like they are giving to an institution, it’s because somewhere, they lost the sense that they are a community sharing a mission.

The second is also a TED talk, and this was is from Dan Pallotta, called “The Way We Think About Charity is Dead Wrong.”

I think his strongest points is that “low overhead” is not necessarily the best criteria for judging the effectiveness of a non-profit charity. I believe churches have fallen into this trap. There are plenty of critiques of the church spending too much money “on itself,” rather than helping the poor. It’s an easy visual to establish: Church members drive by hungry, homeless people to sit in air-conditioned sanctuaries in cushioned pews surrounded by stained glass. (“Stained glass” and “pews” have come to be shorthand for everything wrong with the church). I used to feel the same way, but I’ve served enough churches to know that the presence or absence of stained glass, air-conditioning, and pews are not indicators of the good a community is doing. Now that I’m on the “doing” side of my church-planting dream, I see the importance of investing money and time in doing something well in order to get more bang for your buck. While I don’t think our own community will be investing money in million-dollar lighting systems and holographic projection (although I’ve learned never to say “never”), I can’t simply claim that a church that does so is missing the mark because they could have spent that money on the poor.

The third article is “The Shocking Un-Truth About Church Budgets,” from Amy Butler, senior pastor of Calvary Baptist Church in Washington. She makes the case that salaries and buildings are not “overhead” for doing real ministry. If the staff are effective, and our resources (including facilities) are effectively used, then just being the church is ministry. Calling these things “overhead,” as if they were somehow tangential to the real work of ministry, indicates that something is wrong either with our mission or the way we think about it.