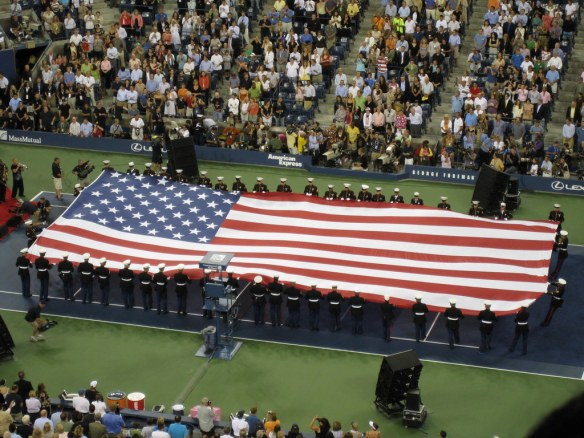 • I always looked forward to being on the color guard in Boy Scouts. Learning the flag code and participating in ceremonies with the scouts made me aware that we were part of a bigger American story, even if we were just kids playing steal the bacon and learning how to cook over a fire.

• One of my favorite memories of South Korea was encountering an elderly man on the subway, who asked us, “American?” We said yes, and he spent the rest of the trip smiling and nodding at us. When we reached our destination, he stood up with tears in his eyes, took an American-flag handkerchief out of his pocket and waved it to us, saying, “Good-bye, friends!” It occurred to us that he had probably lived through the devastation of the Korean War, and was still grateful that he was not in a prison camp. The flag meant something to him.

• In the present controversy over kneeling during the anthem in protest, people often claim that this behavior is disrespectful to the military and veterans. This is a red herring. The American flag is not only the flag of the military—it is the flag of the whole United States. It is the flag of women suffragists no less than the Army, and the flag of Japanese internment camp survivors no less than the Air Force. That’s the thing about the flag—nobody gets to own it, because we all own it. This country is run by its people, not a junta. The sacrifice and suffering of soldiers does not trump the sacrifice and suffering of black men lynched for having the courage to register to vote. It is not elevated to some higher or more sacred platform than the brave sacrifice of ordinary citizens whose homes were bombed for protesting injustice.

• The Armed Forces of the United States of America is not a priesthood, though it is often elevated to that position by chickenhawk civilians. While the military (and its various branches) has its own culture, codes, and customs, its purpose is to serve the nation—not the other way around. The veterans I know from every branch who have served proudly are deeply philosophical about their service. They know their colleagues and the people they command(ed) are human beings—siblings, parents, children—who all have hopes and dreams. They are from all different economic levels, races, and backgrounds, and all have their own struggles. The leaders among them think strategically and understand the value of diversity, the importance of outcome-based measurement, how to set clear goals, and how to discern leadership potential. They also understand that life is complicated. They are not politically homogenous. They are people I am proud to know.

• The flag, and the nation it represents, is far younger than slavery, which existed in this land before our nation did, and the effects of which continue to be ignored, redacted, and downplayed by many white Americans. Citizens owe nothing to the flag that they do not also owe to their ancestors. Again, without slaves, Native Americans, women suffragists, civil rights protesters, abolitionists, immigrants, and organizers, there is no American history, and the flag stands for nothing worth respecting. If one does not know something of this history, one does not know the flag, and any gestures toward this multivalent symbol are worthless.

• MLK repeatedly made the point that protest is not palatable to people in power or to those comfortable with the status quo. He pointed out that Daniel, Shadrach, Meshach, Abednego, and the early Christians were protesters who faced public shaming and death. The people who threw Christians and Jews to the lions also claimed that these people were trouble-makers, ungrateful to Rome (or Babylon), disrespectful, and generally individuals of low moral character. People who protest would not have to protest if everyone agreed with them!

• Nobody’s inferences of disrespect get to have more weight in the public moral universe than someone else’s clearly stated purposes for their actions. Continuing to claim that kneeling is “disrespectful” is an arbitrary judgment. Actions have many meanings: for example, according to the flag code, burning the flag is an acceptable way to dispose of a damaged flag; burning at a protest has a different meaning. If someone chooses to be offended by the proper burning of the flag, or by kneeling at its display, I suppose that is their business. Technically, you are not supposed to applaud at the end of the national anthem, but people do anyway. Nobody storms out of the stadium because people have shown disrespect by applauding. The meaning you attribute to someone else’s behavior is really more about you than about them.

• The commodification of the flag, its use as a bumper sticker, and its appropriation by white nationalists bothers me far more than professional athletes kneeling in front of it. Just as it grieves me that the language of my faith has been appropriated by people like Roy Moore to justify bigotry, it grieves me that the flag has been appropriated by people for the purpose of silencing protest and advancing white supremacy. Those who take the cross and flag as symbols for their tribalism have missed the point of each, and created a national religion that is more about the worship of Molech and Baal than of the God of Jesus Christ, and a patriotism that is more about white supremacy than about civic engagement or support for our shared values.