Again, the devil took him to a very high mountain and showed him all the kingdoms of the world and their splendor; and he said to him, “All these I will give you, if you will fall down and worship me.” Jesus said to him, “Away with you, Satan! for it is written, ‘Worship the Lord your God, and serve only him.’” Then the devil left him, and suddenly angels came and waited on him.

In Matthew, the third temptation is for Jesus to trade worship of the devil for all the kingdoms of the world. 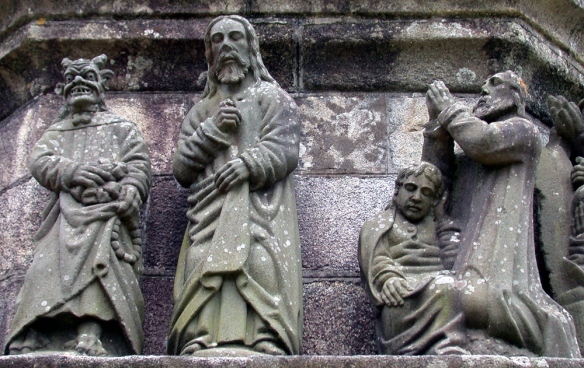 Neither worship of the devil nor all the kingdoms of the world are very attractive to me, so it’s a bit hard to wrap my head around this temptation. Many commentators and pastors suggest this was “the easy way” for Jesus to become the messiah.

There are two angles that make this temptation more understandable to me. The first is that Jesus was not a 21st century North American, but a member of an oppressed people living under occupation. I can imagine Satan saying to Jesus, “How well is worship of God working out for you? You’ve been under the heel of Egypt, Assyria, Babylon, Persia, Greece, the Seleucids, and Rome. Had enough yet?” So while the offer is not enticing to me personally, I can certainly imagine being fed up enough to leave behind the Way of Jesus for the Way of Caesar, or to trade Israel’s faceless, mysterious God for a god with some muscles and lightning bolts, like Baal or Zeus.

Here is the second angle that makes this temptation understandable: we can see multiple times in history when Christians have traded their historic witness for power. This was clear most recently in white evangelical support for Roy Moore, but we can also see it in religious wars, inquisitions, colonialism, and the slave trade. Apparently, all that is required is the promise of money and political power, especially when Christians believe—rationally or not—that they are the oppressed minority. The devil is particularly adept not only at wearing religious clothes and masquerading as God, but doing so while offering us the chance to settle the score, to win at our enemy’s expense.

Jesus tells of a Kingdom in which the poor, the meek, those who hunger and thirst for justice, and those who work for peace are “blessed.” If the path you pursue doesn’t bless those people, it’s probably from the devil.

Twice a week during Lent (usually Tuesday and Thursday) I do a short reflection on a Bible verse from a devotional and social justice perspective. You can sign up to get a prompt via SMS here:

Text Of The Day

You can give online here to support the ministry of Saint Junia.