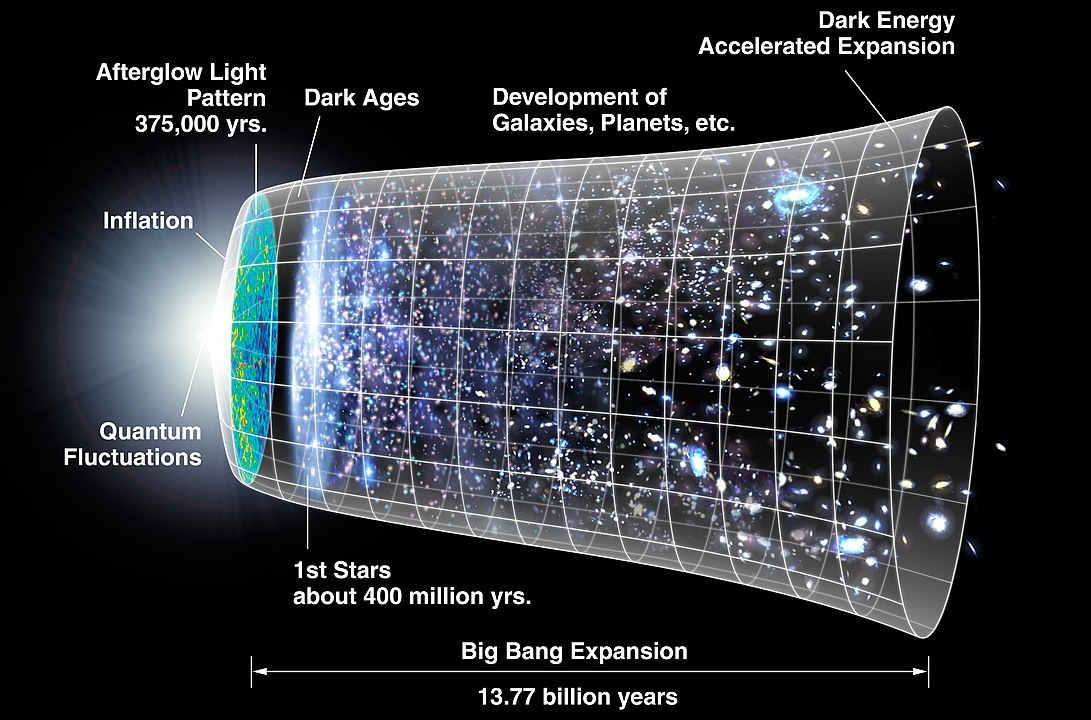 Timeline of the Universe, by NASA/WMAP Science Team. From Wikimedia Commons

Krishna says to Arjuna, almost in passing: I told this eternal secret to Vivasvat [the sun god]. Arjuna, stunned, replies: You were born much after Vivasvat; he lived very long ago. Why do you say that you taught this yoga in the beginning?

Krishna answers: You and I have passed through many births, Arjuna. You have forgotten, but I remember them all. My true being is unborn and changeless. I am the Lord who dwells in every creature. Through the power of my own maya, I manifest myself in a finite form. (BG, 4:1-6)

If you’re familiar with the gospel of John, you may hear echoes of Jesus’s conversation:

“Your father Abraham was overjoyed that he would see my day. He saw it and was happy.”
“You aren’t even 50 years old!” the Jewish opposition replied. “How can you say that you have seen Abraham?”
“I assure you,” Jesus replied, “before Abraham was, I Am.”  So they picked up stones to throw at him, but Jesus hid himself and left the temple. (John 8:56-58, CEB)

In Christian theology, Jesus is speaking here as the pre-existent Word of God (John 1:1), who has always existed outside of time, the one through whom all things were created (1:3), and who was a sacrificial lamb “slaughtered from the foundations of the world” (depending on your translation; see the note on Revelation 13:8, NRSV). Similarly, Krishna, in human form, makes a claim that he was pre-existent. The main difference is that Krishna includes Arjuna in this timeline—they’ve both been around forever.

I’m not going to delve deeply into incarnational theology in Hinduism and Christianity today. I just want to point out the similarity in these dialogues. Both Jesus and Krishna reveal that a) they have known characters outside their obvious mortal timeline and b) they have a claim on divinity. Jesus pretty much calls himself God; “I Am” is the nameless name of God revealed to Moses (Exodus 3:14).

And while I think we could talk about theological differences between Hindu and Christian understandings of incarnation, I want to point out a feature of John’s story that is often overlooked: Jesus hides and escapes a lot. It’s in the last sentence of the above scripture, and also in 7:10, 10:39, and 12:36. I do not think this is simply because Jesus is shy, or trying to save his skin long enough to be executed on the right day. I think John is making a point about the way Christ is hidden in the world. The Source of Life, dwelling in every creature, is simultaneously hidden and revealed, manifest and hidden:

Prayer:
Life and Light of All People, show yourself to me; help us all to recognize you, present everywhere and in every creature.

Do you think the world would be better if we read the Bible differently?
Support Saint Junia’s network of house churches so we can find out together!

1 thought on “The Bible and the Bhagavad Gita 17: From the Beginning”