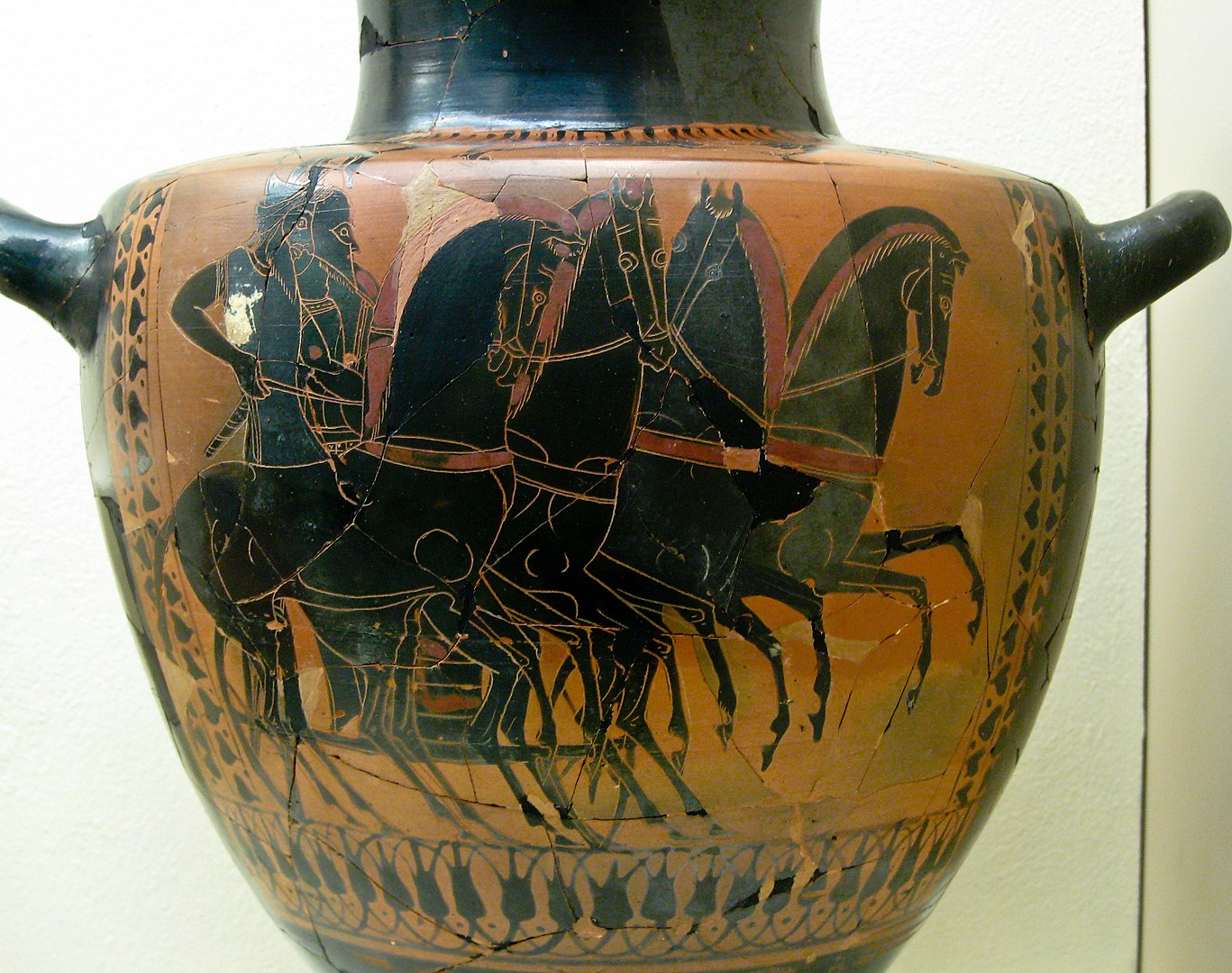 Hydria with Depiction of Quadriga, Charioteer and Hoplite, Workshop of Lysippides Painter, 530-520 BC. From Wikimedia Commons. The Bhagavad-Gita describes the human person as a chariot, with the will as the driver and the Self as the lord who rides along.

This is a place where it’s worth doing some language study. The above translation is from Easwaran, which I have used for most of these devotionals. But I think it’s important here to compare it to the Feuerstein translation:

He should raise the self by the Self; he should not let the self sink; for, [as] the self is indeed the friend of the Self, [so also] is the self indeed Self’s enemy.

As I’ve said, I don’t know Sanskrit at all. My Hebrew is pretty thin, and my Greek is only slightly better. I rely on language experts and multiple translations to help me wrestle with ancient scriptures. The issue in this passage is the various creative ways atman is used.

Easwaran chooses to make this a distinction between the will and the Self. Feuerstein instead goes with “lower self” and “higher Self.” Either way, the notion is that the part of us that is truly divine and eternal, that aspect of our consciousness that retains a connection to the Lord of Life, is the real higher Self. But in our confusion, we often think of the part of us that decides and has agency as who we really are. This is the lower self, or as Easwaran interprets it, our will.

The reason I prefer the Feuerstein translation in this instance is that in the next few verses, Krishna is going to talk about meditation, and I think our Western way of thinking about the will, and willpower, and self-control, and achievement often poison our understanding of meditation. People will say, “I’m no good at meditation,” because they’ve been taught that it’s about controlling your thoughts. It’s a paradox present in so much spiritual growth, that we have to learn how to relax. People sit down to meditation with the idea that they are going to grit their teeth and really focus. Through effort and intense concentration they are going to still their thoughts.

It’s like trying to pick up a towel while you are standing on it.

We will look more, eventually, at the different components of the self, this thing I think of as I. But for now, let’s rest with this truth: There is part of me that is pure consciousness (Self), and there is part of me that has agency and makes decisions (lower self, or will). The part of me that has agency can facilitate my knowing my Self, or it can obscure it. Deciding to decide in favor of my Self is one of the most important decisions I can make, and yet I often choose distraction. I procrastinate on enlightenment. Paul expresses something similar: “I don’t know what I’m doing, because I don’t do what I want to do. Instead, I do the thing that I hate” (Romans 7:15, CEB).

My self can be an ally of my Self, or it can be an enemy. Do I have the courage to explore why?

Prayer:
Master of my Self, help me master my self.

Do you think the world would be better if we read the Bible differently?
Support Saint Junia’s network of house churches so we can find out together!