We homeschool, and my son is studying American history. Back in the spring we took a trip to Jamestown and Williamsburg. Now he is studying the Constitution. I love the fact that he’s going around the house singing the songs I learned as a child from Schoolhouse Rock, like this one.

Man, I love that video.

Anyway, it caused me to reflect a bit. The very idea that you “constitute” something new by a bunch of people coming together and writing a statement is interesting. It’s a very Enlightenment-era idea, and it expresses something admirable, I think. They were saying, “We now have an identity, a vision of the future, and a way we’re going to do things.” It was a mission statement.

I think it’s important for our gestating church to likewise develop its identity. Often before we can say who we are, we have to say who we are not. Differentiating yourself is an important step in the growth of any living thing. In this case, we want to clearly say, “We are not like every other church. We do not believe you are going to hell if you disagree with us. We do not believe that to follow Jesus you have to vote a certain way, speak a certain way, or cling to a certain interpretation of the Bible.” As one of our members said yesterday, when he invited a co-worker to be part of our church, he began with a warning: “I just need to let you know, this is going to be a different sort of church than you are used to.”

But you cannot only say what you are not. You also have to declare what you are. A healthy, mature being has a constitution, an awareness of it’s own identity and mission in the world. Mission, vision, and core values are all part of this group identity. For the Founders, some of those values were representational government, a social contract for the general welfare, and government non-interference with regard to religion.

They didn’t get it all right on the first go-around. Extending rights to African-Americans and women were changes they had to make to keep in line with the original ideals. There was huge resistance to both these movements.

In the same way, I know our new Birmingham church, Saint Junia United Methodist Church, is going to go through a growth process. We are going to meet resistance to our message and our method. But if we are clear about our identity, both who we are not and who we are, then I believe we can grow into a healthy, mature church.

We, the people, together.

On July 1, twenty-seven people gathered at our house for our first afternoon worship and planning meeting, followed by a potluck supper (because you can’t be a real church without potluck suppers!). The vision of this new church is to become a diverse community of sinners, saints, and skeptics who join God in the renewal of all things. “The renewal of all things” is a pretty big idea, so we try to break it down into five aspects of our life together: Worship, devotion, compassion, justice, and witness. Each of the five Sundays in July we will gather at 4:30 to talk about one of the five areas. 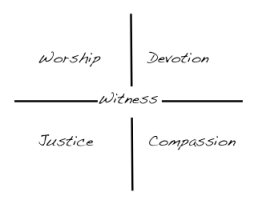 All of these flow from the two great commandments: Love God and love your neighbor. We love God as a community through worship. We love God individually through our devotion. We love our neighbors as a community by doing justice in Birmingham and in the world. We love our neighbors individually through ministries of compassion. Binding all of them together is our witness to what God has done and is doing through Jesus Christ.
We also went about the business of doing business and delegating roles. Over the next few weeks Angela and I will be talking with folks about how they would like to grow spiritually through this new church, and what they can in turn offer to others.
We are so thankful to Trinity and Canterbury UMC for all their encouragement, financial support, willingness to serve, and prayer. God is already doing great things.