Today’s text is from John 10:19-20. Jesus has just finished saying he has the power to lay down his life and take it up again:

Again the Judeans were divided because of these words. Many of them were saying, “He has a demon and is out of his mind. Why listen to him?”

In the Gospel of John, wherever Jesus goes in Jerusalem, he causes division. Some support him, others reject him (see John 9:16).

People often talk about polarization as a problem in our society, and indeed it is true that we face a challenge adapting to new communications technologies. And it is also true that if we try harder, we can find common ground when arguing about contentious topics.

So much of mainstream politics involves an appeal to togetherness. Politicians perennially pledge to create common ground and help the country’s citizens overcome their disagreements. And yet, social movements often take an approach that is almost the exact opposite: instead of bridging differences between groups, they widen them. (199)

They also quote the words of 19th-century abolitionist Frederick Douglass:

“Those who profess to favor freedom and yet depreciate agitation are men who want crops without plowing up the ground, they want rain without thunder and lightning. They want the ocean without the roar of its many waters.” (205)

Critics often decried Martin Luther King, Jr.’s tactics as “divisive,” the same way they deride every other social movement ever. Sure, people today are polarized. They are polarized primarily because we had a black president, and the ugliness of white supremacy is lashing back. We are beholding our racism, classism, and misogyny laid bare, and it is ugly—and plenty of folks love the ugliness.

John describes what happens when Jesus’ light shines in the darkness: “And this is the judgment, that the light has come into the world, and people loved darkness rather than light because their deeds were evil” (John 3:19). Polarization happens. People either turn toward Jesus’ light or away from it. They either turn toward the love of God incarnate in Jesus, or toward human systems of power and control, toward wounding ourselves, each other, and the world; toward sin.

Along Interstate 65, from Huntsville to Nashville near the Tennessee border, there is a giant silver-and-gold-painted statue of Nathan Bedford Forrest, a Confederate general and the first Grand Dragon of the KKK. It is surrounded by Confederate battle flags. It is hideous. You can’t see a close-up of his face from the road, but here it is: 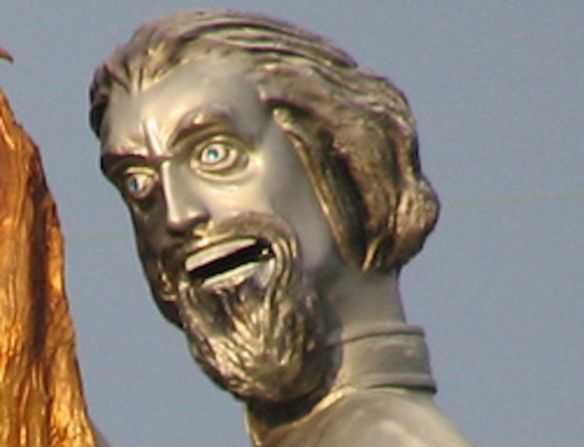 When light shines on the ugliness in our world, on the ways we wound ourselves, each other, and the planet, it is inherently divisive and polarizing. While we can hope that heart-to-heart conversations will find common ground, that hard hearts will become soft, and that the Holy Spirit will lead to conversion, taking sin seriously means recognizing that there are forces of evil determined to hold onto power. What is driving polarization in our country is not simply that people are unwilling to listen to each other. What is driving polarization is the pervasive sin of racism and white supremacy, tucked into the corners of churches, communities, and public offices, masquerading as “economic anxiety” or differences of opinion over policy.

Shining a light on this ugliness may be “divisive.” It is also completely necessary.

Twice a week during Lent (usually Tuesday and Thursday) I do a short reflection on a Bible verse from a devotional and social justice perspective. You can sign up to get a prompt via SMS here:

Text Of The Day

You can give online here to support the ministry of Saint Junia.